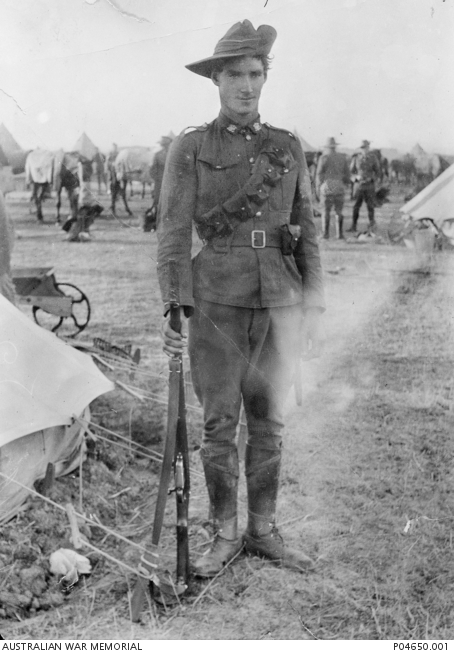 Martin in his uniform

Life as a 19-year-old farm hand, in country Kamarooka, Victoria was relatively smooth sailing until WWI broke out.

Martin O’Donoghue enlisted on the 19th of September 1914, in Bendigo, Victoria. With a scar on his right eyebrow, blue eyes, brown hair and a fair complexion enlisting all went smoothly. He left his father, Patrick O’Donoghue home in Kamarooka to be his next of kin. 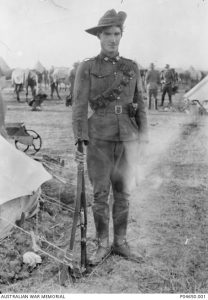 Martin in his uniform

The 25th of February was the day that would change many people’s lives and Martins. Embarking from Melbourne, Victoria, aboard the HMAT A54 Runic. to be part of the 8th Light Horse Regiment A.I.F, ranked trooper.  Life would never be the same again. Now known by his regiment number 633, Private Martin O’Donoghue set sail. 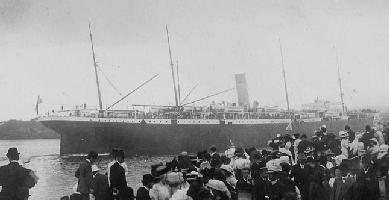 Martin’s life through was not a smooth run. Landing on the Gallipoli Peninsula on the 16th May 1915, the worst was yet to come. Admittance to the hospital became an all too often occurrence for this battling soldier and 3 months after landing (25th August 1915) he was admitted at Alexandra on S.S Ulysses and was administered to number 2, Australian General Hospital, Cairo as a debility arriver. The date of return to the Peninsula is unknown but it was a quick encounter as a shell mine explosion lead him to again be admitted to the British Red Cross Hospital at Montash Alexandra on the 5th September 1915.

Just over 2 months later he returned to active service on the battlefields. The next 24 days were fraught with danger but without any injuries, everything was running smoothly. It was then on the 30th November 1915 when he was admitted as sick to hospital. Records then tell us that 2 days later he was admitted to the 21st General Hospital because of septic foot and was now dangerously ill.

Christmas came around on the 25th December 1915, but from what we know there would have been no joy shared. It would have been a day of pain and agony for this seriously ill soldier. It was just after, on the 26th December 1915, at 12:15 am when one young, determined and loyal twenty-year-old soldier left our world. It is suggested that the death was caused because of Gaseous Gangrene and may have also contracted septicemia after his amputation (No records stated a body part was amputated but the death is thought to be due to an amputation).

It would be fair to say that the family would have been devastated after his death. His possessions were sent home. Two brown paper parcels were sent, containing some items clearly holding sentimental value. The first parcel contained: three razors, a rifle cleaner, two shaving brushes and shaving soap. The other containing: a mirror, brush, notebook and housewife. A ‘housewife’ was a small kit to patch/fix socks and clothes, containing buttons, thread and needles.

Also after his death, he received a Victory Medal that his family received on the 1st November 1922, British War Medal and a Star Medal. Along with other fallen soldiers Martin received a King’s message, which was printed onto parchment paper as a scroll. Martin’s reading:

“He whom this scroll commemorates was numbered among those who, at the call of King and country, left all that was dear to them, endured hardness, faced danger, and finally passed out of the sight of men by the path of duty and self – sacrifice, giving up their own lives that others may live in freedom. Let those who come after see to it that his name be not forgotten. Pte. Martin O’Donoghue, 8 L.HR. A.I.F”

This scroll was handed onto family members for them to treasure as a remembrance of a much loved fallen soldier and family member. 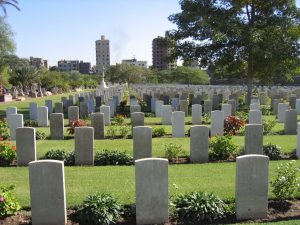 Martin’s body was not returned back to Australia, but he was buried in Cairo, Egypt at the Cairo British Cemetery. His name is on the Roll of Honour, located at 6 in the Commemorative Area at the Australian War Memorial, Canberra.

Records state that Martin was buried in Cairo, Egypt. He is also remembered at the Raywood Cemetery, where both his parents are buried. This is what many families did to mourn their lost sons killed overseas. It was a way of remembering those who had fallen and were buried overseas.

Many families saw their soldiers return but for the O’Donoghue family all they had to do was mourn over the death of their son. Life for them would never have been the same again.

As Australians we appreciate the sacrifices that soldiers made and realise that for some it ended their life, including Martin. Their sacrifices now mean that we can live in freedom.