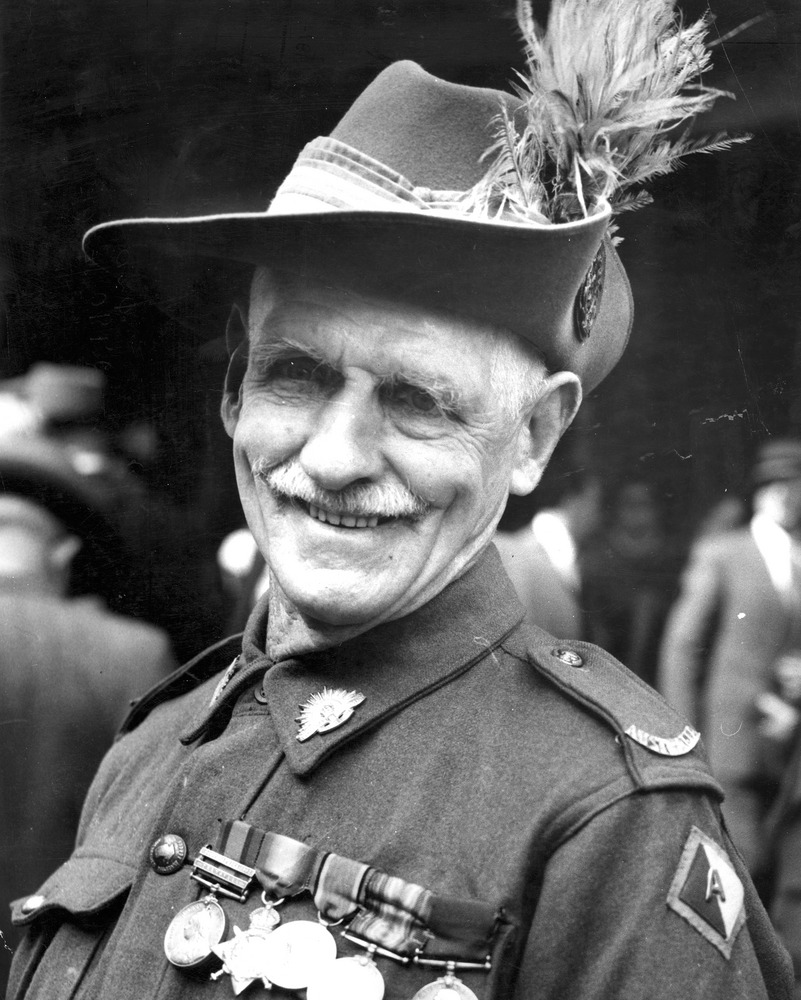 Ernest after marching with the 13th Light Horse in the ANZAC march, 1956.

Ernest Old was an inventor, cyclist and soldier. He engaged in active service in the Boer War and World War One. He even attempted to enlist for World War Two in his late 60s.

He was born on 10 July 1874 at Barrys Reef near Blackwood, Victoria. Ernie was the son of Thomas Spear Old and his wife Charlotte (née Mitchell.) Thomas selected some land at Dingee, north of Bendigo. Ernest went to Prairie State School and he worked on his father’s farms with his brothers. He enlisted in the Boer War but never saw action. He also enlisted in WWI firstly with the 13th Light Horse Regiment in Gallipoli and then with the 2nd Pioneer Battalion on the Western Front. 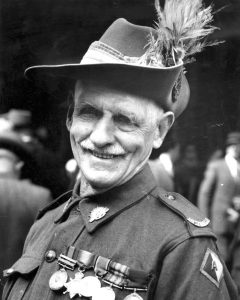 Ernest after marching with the 13th Light Horse in the ANZAC march, 1956.

Ernie’s story is also an interesting one because of his inventions and his keen lifelong interest in cycling. In 1896, Ernie and two of his brothers moved to Swan Hill to develop land owned by the family. It was here that Ernie became interested in machinery rather than farming. He later created a design for an innovative scarifier with parts which were easily replaced. He sold his farm and instead purchased his father’s interest in a smithy, manufacturing his scarifier.

Whilst in Swan Hill, Ernie began to cycle competitively, experiencing success locally. In 1901, Old competed in the Warrnambool to Melbourne road race, finishing eighth overall. After not racing in 1902 due to his enlistment in the Boer War, he competed again in 1903 in the same race and finished fourth under the handicap. Though his performance was promising, he suffered a bad fall in the 1904 race. It was a wet year, and many of the cyclists fell in the ‘mud and slush.’ After WWI, he returned to long distance cycling, undertaking many amazing rides between major cities in Australia and raising money for charity. 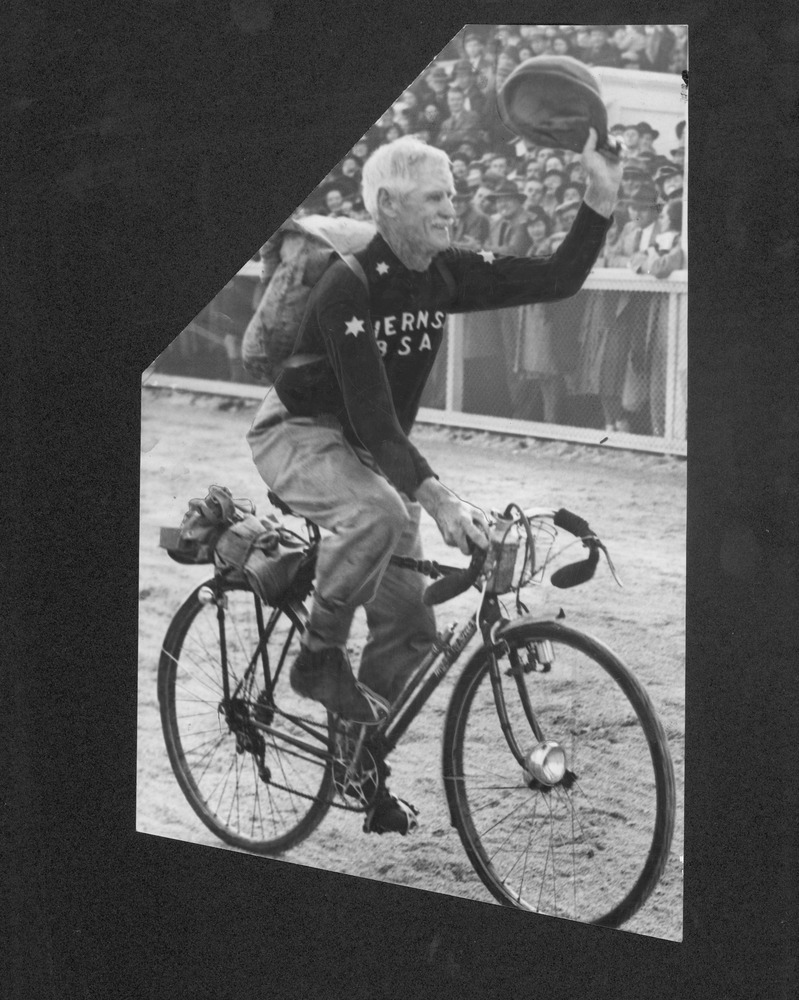 Whether through a sense of patriotism or adventure, Ernie enlisted in two wars, even attempting to enlist again at the age of 65. In the Boer War he enlisted in the 4th Battalion on the 11th of February, 1902. As the war ended in May, Ernie did not participate in active duty and arrived home in July 1902. On the 23rd of February, 1905 Ernie married Marion Patience Grylls at the Dingee Methodist Church. They remained in Dingee.

On the 22nd December 1914, Ernie left his business in the care of his brother and enlisted at Raywood to serve in WWI. He was forty years old at the time. He was sent to Gallipoli, serving with the 13th Light Horse Regiment and later on the Western Front with the 2nd Pioneer Battalion. He contracted the mumps (or ‘Parotitis’) but recovered before long and returned to his Battalion. It was in Flers, France that he received gunshot wounds to both his thighs on the 14th November 1916. From there he was transferred to England to receive medical treatment before being discharged from the army on the 22nd March 1918.

When Ernie returned home, he discovered that his scarifier design had been made redundant, with other improved alternatives on the market. He turned his attention toward making motor vehicle improvements. His motorcar steering stabilizer- a cost-effective alternative to replacing worn parts- was so successful that Ernie was able to comfortably survive the Great Depression years. 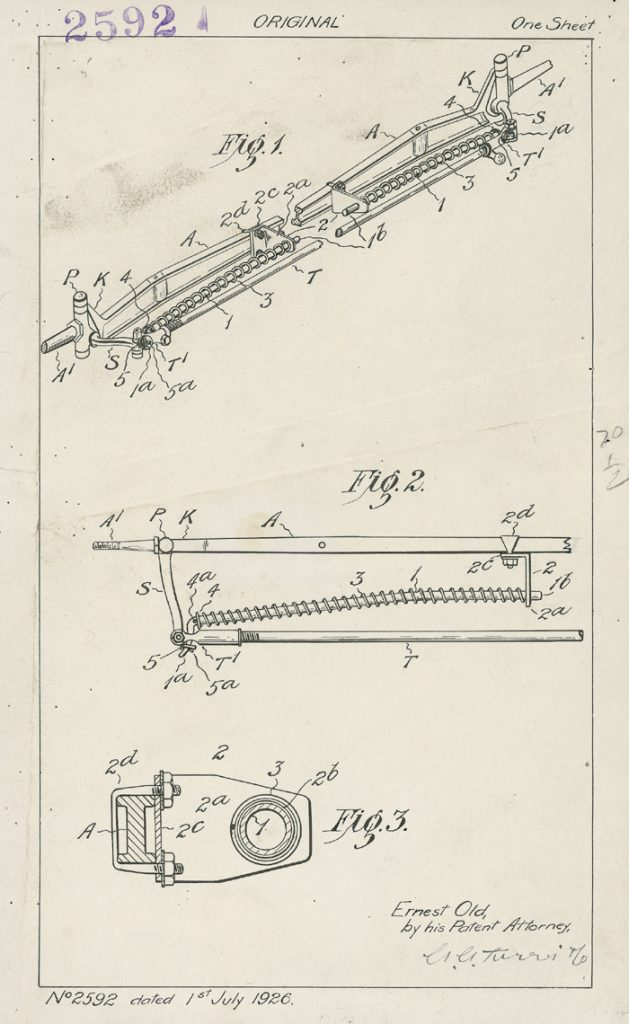 The patent for Ernie’s steering stabiliser.

During WWII, Ernie tried to enlist in the A.I.F. but was denied due to his advanced age (65 years old!) He then took on projects as a blacksmith such as the construction of the Lauriston Reservoir, near Kyneton. He later worked at the Ordnance Factory in Maribyrnong, Melbourne.

In 1955, Ernie wrote a letter to the Prime Minister, Robert Gordon Menzies, to offer a contribution to the publicity for the Melbourne Olympic Games. His idea was to personally deliver invitations to the various Premiers, inviting them to the Games by way of a national bike ride. 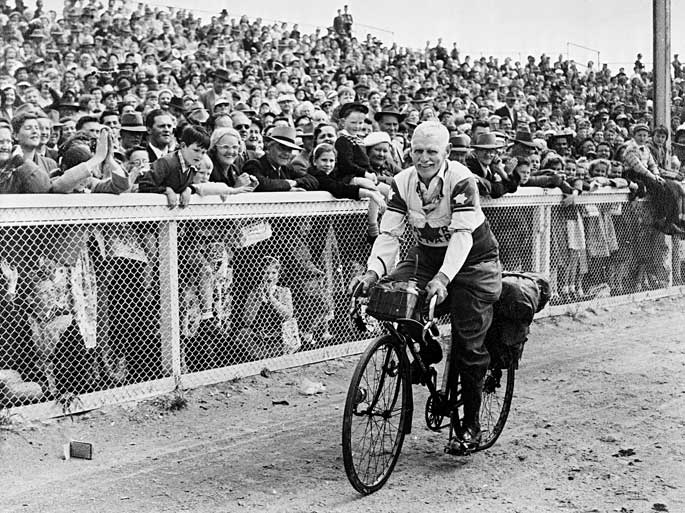 Ernie Old on one of his famous bide rides.

His letter suggested that Australia had “given me a long and happy life” and that it was up to him to contribute “as much as possible to our big projects.” The Prime Minister did not take up Ernie on this offer, for fear that the ride may put unnecessary strain on Ernie, possibly killing him. He was 82 at the
time. While he did not make the wonderful journey between states, Ernie again displayed a love for Australia which he will be remembered for many years to come.