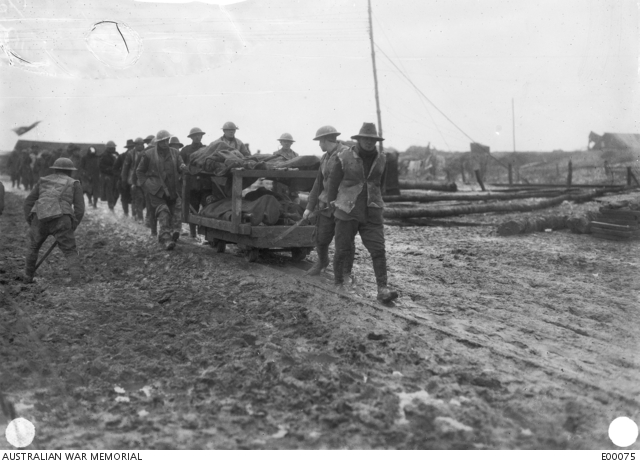 Alfred served at Gallipoli and in France. He was a grenadier and later worked with the light railways.

Alfred Norman Cowie was born to parents Nicholas and Elizabeth at Moe in 1894. He had an older brother, George, and three sisters: Mary, Edith and Madge.

Alfred Norman Cowie was born to parents Nicholas and Elizabeth at Moe in 1894. He had an older brother, George, and three sisters: Mary, Edith and Madge.

Mining family
Alfred’s father had been the underground manager of the Hustler’s Reef Mine in Bendigo. His brother George also worked there for a time.

Nicholas, Alfred’s father, passed away in February 1911 and was buried in Eaglehawk. Elizabeth later moved to St Kilda.

At the time of Alfred’s enlistment on the 24th of March 1915, he was 21 years old and working as a labourer, presumably in the East Loddon district. He had light brown eyes and hair, a fair complexion and stood at 5 foot, 11 inches. He was allocated initially to the 10th Battalion but this was soon changed and he became Private in the 24th Battalion, C Company.

Grenades and Railways
On the 10th of May 1915, he embarked on the HMAT Euripides for the war front and served in Gallipoli until the AIF’s withdrawal in December 1915. He then served in France. In 1916, he wrote to his mother that he had been appointed to the role of a grenadier. On the 27th of December 1916, he was attached as a Fettler to the 17th Anzac Light Railways. In his new role as Fettler, Alfred would have been tasked with building and maintaining the railways on the war front. This enabled the wounded to be removed from the battlefield quickly, also saving stretcher-bearers the effort of carrying men by hand.

Hardship after hardship
Whilst at war, Alfred suffered ailments such as hernia and tonsilitis which resulted in him being hospitalised. He also learned the news in November 1917 that his brother, Gunner George Gladstone Cowie of the 18th Howitzer Brigade, had been killed in action. After meeting with a gunner from his brother’s battery, Alfred relayed the story of George’s death to his mother in a letter and the news was later published in Bendigo newspapers.

On the 16th of September 1918, Alfred presented to the hospital with a peri abscess on his left thigh. He would later be invalided to the UK and returned to Australia on the 14th of December 1918.

Alfred passed away on the 1st of September 1960 and is remembered at the Mt Thompson Crematorium in Queensland. He was 66 years of age.