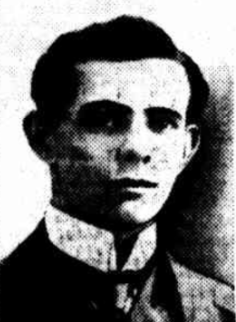 Walter Hopper was a motor mechanic from Mitiamo. He enlisted very early in the war on the 29th of August. His elder brother Hugh also served in World War One.

Private Hopper served in Gallipoli as part of the 1st Battalion, G Company. He was promoted to Lance Corporal in late 1914 and again to Corporal in 1915.

Shortly after his last promotion, Walter was sadly killed in action on the 19th of May, 1915. He is remembered at the Lone Pine Cemetery in Turkey.

Walter Hopper enlisted under the false name ‘Walter Whitfield’. Later, his brother Hugh wrote a letter to the AIF notifying them that the assumed name had been chosen for ‘family reasons’.

It may seem unusual that someone would use a false identity when choosing to go to war. However, it is predicted that as many as 15, 000 servicemen used an alias (around 3.5%).

Usually, soldiers chose an alias if they were trying to avoid attention. For example, they may have been too young to enlist. Perhaps their family disapproved of their enlistment or they may have even had extramarital relationships they didn’t want to expose.

It is unclear as to why Walter Hopper took on an assumed name. The information provided above is general information but does not attempt to explain why Walter chose a false name.