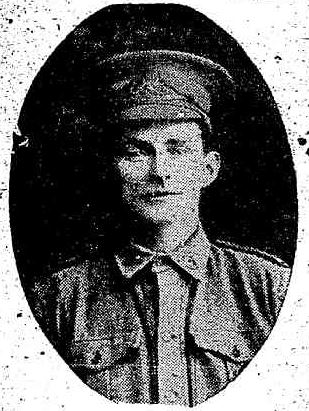 Denny the butcher and footy player

Denis – or ‘Denny’ as he was known in the community- was a 33-year-old Butcher from Mitiamo. He played for the Mitiamo Football Club.

He enlisted on 14 July 1915 and became part of the 8th Light Horse Regiment. He took part in some heavy engagements with the enemy, with his horse being shot out from under him on one occasion in Egypt.

Clashes with the Turks

Denny wrote to his mother and sister from Egypt in early 1917, recounting a clash his division had on the 9th of January where a significant number of prisoners were taken. Although he was held in reserve for this fight, he commented:

It was grand to see our men advancing across the open ground to the Turkish trenches under heavy rifle and artillery fire.
The Turks seem to dread the bayonet. They fight until our men get right to the trenches, and then they hoist the white flag

Ever the country lad, Denis couldn’t help commenting on the fertile land and fine crops in Syria where some of the fighting had taken place.

Denny was promoted to the rank of Lance Corporal in January 1917 and again promoted in August 1917, this time to the rank of Corporal. He was soon after transferred to the 3rd Light Horse Battalion training battalion in Egypt.

In January 1918 he returned to the 8th Light Horse Regiment. On the 22nd of March 1918, he took part in the First Amman Raid. His regiment’s aim was to destroy Turkish railways and inflict Turkish casualties. After two days, the Allied forces withdrew.

Denny took part in the Es Salt Raid in April/May 1918. Initially, on the 30th of April, the Aussies were making good headway in the raid at Es Salt in the Jordan Valley and seized the town. However, counter attacks on the 3rd of May forced the Aussies to withdraw. During this battle, Denny received a gunshot wound to his head. He was evacuated to the 2nd Light Horse Field Ambulance but sadly succumbed to his wounds on the same day.

Denny was buried near the main Es Salt-to-Amman Road. However, he has no known grave. He is listed on the memorial at Jerusalem.

The Bendigo Advertiser reported his death, saying the news had ‘cast a gloom over Mitiamo’.

In October 1918, Denis’ brother Michael was also killed in action, leaving one brother of the three who served to live (Timothy).