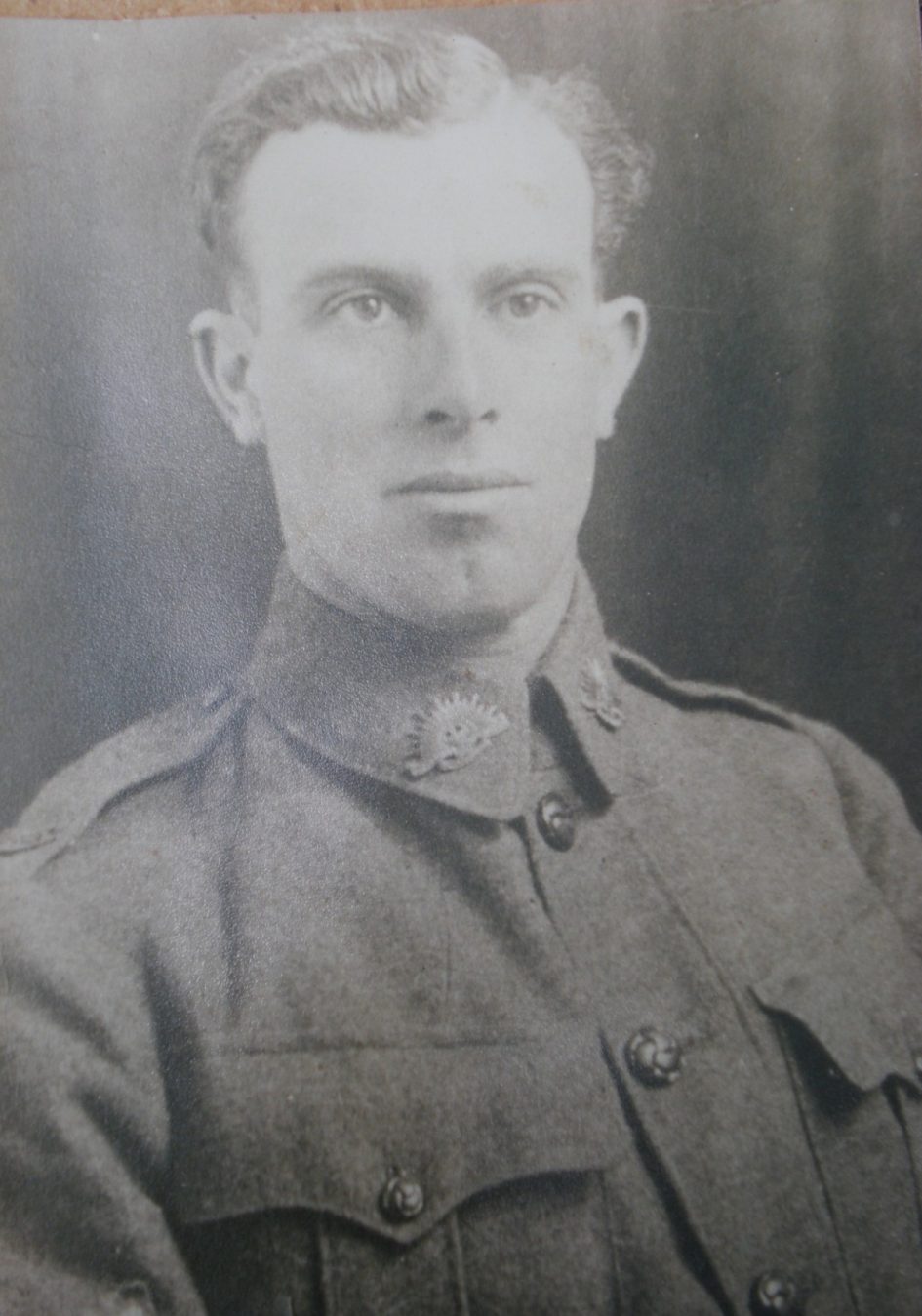 Charles Frederick Gladman was a victim of German firepower

Charles Frederick Gladman was born in February 1890 to Alfred and Margaret Gladman in Mitiamo. The family moved to Serpentine in 1894 with his father gaining employment with the Loddon Water Trust.

When his father Alfred purchased the local bakery in 1912, Charlie and his brothers began to work there too. During this time, Charlie played football for the Inglewood team.

When he enlisted in 1915 at age 25, Charlie was still working as a baker. He was engaged to Mary Stuart, a Serpentine girl. As he was an elder of his local Church of England church, he resigned from this role before he embarked for war in November 1915 aboard the HMAT Commonwealth.

Charlie was part of the 7th reinforcements and initially he was posted to the 24th Battalion. When he arrived at Egypt, however, he was allocated to the 8th Battalion.

While he was in Egypt, Charlie visited tourist attractions in between his training such as the pyramids, Sphinx and tombs.

He also saw many people he knew from the East Loddon Shire area while he was in Egypt. His diary mentions about 26 people from Dingee, Calivil, Bears Lagoon and Serpentine.

On the 26th of March 1916, Charlie left Egypt on the SS Megantic. He described the ship as a ‘fine boat of about 15,000 tons’ and commented that the ship was on an erratic course in order to ‘bamboozle submarines’. The threat level was high and Charlie was made one of the life boat crew. He wore his life belt all day, even at meal times.

Safely arriving at Marseilles on the 31st of March 1916, Charlie commented that the harbour view was lovely. Although the soldiers were not granted leave yet, Charlie snuck out to explore one evening.

The fun soon came to an end when Charlie was sent to the north of France. The weather was bitterly cold and the soldiers were billeted out to stay with the locals. They continued training, learning how to walk through gas with masks on. Charlie sprained his ankle on the 10th of April while training. He was not back to duty until the 27th of April.

Sleepless nights in the trenches

A month after arriving in northern France, Charlie and his company moved to the war front near Fleurbaix. He wrote in his diary:

By mid-May, Charlie was promoted to the rank of Lance Corporal. His company occupied the trenches for two weeks, then acting as supports the next fortnight.

When the town of Pozieres was captured by the Allies between the 23rd July and 4 August 1916, the German artillery ramped up their efforts with significant loss of lives. The 1st division suffered 5,285 casualties. Charlie was there until the 27th of July when the 2nd Division arrived to relieve them. He recounted in his diary:

With key leaders injured or dead, Charlie was again promoted. On the 9th of August, he was made Corporal. He led his men to rest at Canaples near Vadencourt before moving into the Sausage Valley to supply fatigue parties on the 15th of August.

Three days later of the 18th of August, they were back to the firing line at Mouqet Farm. It was on this first day that Charlie was injured. He states plainly in his diary that he “got slightly wounded with one of our own bayonets and a bomb.” His enlistment records state that he received a gunshot wound to his leg. His injury was reported in the Bendigo Independent newspaper on the 11th of October, 1916.

Harsh winter conditions in the trenches

Charles was eager to return to his battalion after his injury and was soon promoted to the rank of acting Sergeant while his battalion were stationed on the Somme battlefield. The conditions where he acted as support and relief at Gueudecourt- a small village on the battlefield- were dismal. Charlie recounts:

In late November, Charlie was promoted to full Sergeant (no longer acting). At Bulrin, France, he was tasked with overseeing a group of 35 men as they worked in shifts to load freight on a narrow gauge railway. A week later, he had a day of leave in Amiens before being moved back to the trenches on the 14th of December where Charlie wrote, “My feet are always wet and cold…the mud is indescribable.” In the next months he would go on to suffer through snow and frost in the trenches. He preferred these conditions to the rain and mud.

Once the Germans had established the Hindenburg Line, they retreated to their better defenses behind concrete fortifications. Charlie’s Battalion finally gained some ground near Flers as the Germans moved. He wrote:

As the Germans retired, Charlie noted that they left a trail of destruction to slow down the Allied forces and destroy any assets. On the 6th of April 1917 he observed German attempts to “destroy their work…systematically destroy[ing the town] by pulling down the walls and letting the roofs fall in, also blowing huge craters in the road…in places they have sawn down all the trees…”

Sudden call to arms in Lagnicourt

In their attempts to destroy all of their equipment and supplies, the Germans launched an attack at Lagnicourt on the 15th of April at dawn. Charlie was woken to a sudden call to arms:

“We moved up to a position on a sunken road on the left of Beaumetz and dug in, in the rain too.

The Germans had brought up three special divisions and succeeded in breaking and penetrating our line and took a village from us [Lagnicourt]…before midday they were all driven out with the loss of twelve hundred killed and six hundred prisoners in our hands.”

In mid-May 1917, Charlie acted as Sergeant Major whilst their company’s Sergeant Major was on leave. Their Battalion was stationed at Bullecourt. The Germans were attempting to retake their trench and Charlie’s Battalion saw some of the most intense trench fighting of the war. Although Charlie and his men were able to force the Germans to withdraw, there were 7, 482 AIF casualties within a two week period.

The next major battle Charlie participated in would be his last. Now in charge of the 12th platoon, he was sent to Belgium in September 1917 and was engaged in the Battle of Menin Road Ridge east of Ypres.

A letter sent to his family from Jack Larkin, Lance Corporal of the 7th Battalion, recounts how Charlie met his death on the morning of Thursday the 20th of September 1917. Larkin remembered Charlie as a man who did “great work right from the time we hopped over, keeping the men well in hand and showing a fine example to everyone by his gameness and coolness.”

“He and I were together all the way through and we going splendidly until after we passed the first two objectives for fully 1000 yards. Just in front of our third objective, our barrage was holding us up a bit and also one of Fritz’s pill-boxes, from which he was continuously firing a machine gun at us.

Charlie was up on top and we were discussing as to how we would crawl around this pill-box and bomb the occupants out…unfortunately it was at that time a heavy 9.2 shell landed less than 10 yards from us and a piece of the shell casing struck Charlie on the centre of the left thigh, practically severing the leg in two…a couple of us laid him in a shell hole, bound up the wound as well as we could…unfortunately, next day I found out another shell came whilst he was sitting in the shell hole and tore half his back away, thus killing one of the finest and most conscientious soldiers I have ever met in the army. A great sport, one who was fair and just in every dealing. I indeed have lost one of my best comrades…”

Charlie’s fiancé, Mary Stuart, went on to marry Sinclair Laird, a Calivil dairy farmer. To remember Charlie, she wore a wishbone brooch with Charlie’s Battalion colours on it.

Charlie’s sister Ivy went on to marry Joseph Stuart who was in the 7th Battalion and was brother to Mary.

Charlie is commemorated at the Ypres (Menin Gate) memorial in Belgium.