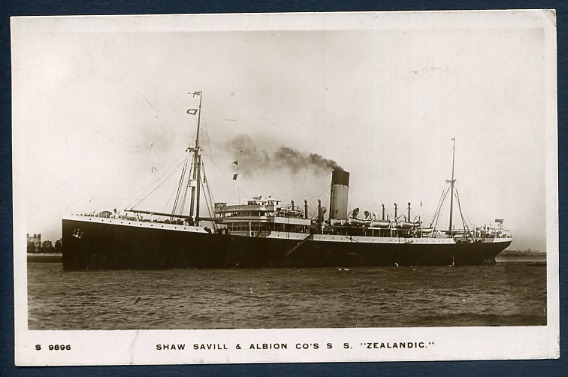 Robert James Dobbie enlisted in 1918, but the Armistice Peace treaty was signed before he ever saw action.

Robert James Dobbie was born in Calivil on 2nd of March 1898 to father Robert Fraser Dobbie and Kate Dobbie (Newman.) Robert started his life as a farm hand then enlisted in the A.I.F. (Australian Imperial Force.) He was a late enlister, signing up at Bendigo on 8th of March 1918 at the age of 20. His service number was 61845. He had dark brown hair and brown eyes. He was 5 foot, 10 ½ inches tall and 10 stone, 7lb (66.8kgs.)

On the 5th of October 1918 he embarked on the requisitioned White Star Liner, S.S. Zealandic to go and fight for his country. Whilst travelling to Europe, Robert Dobbie became ill on the ship and was admitted to the ship’s hospital on 14th November 1918, three days after World War I had officially ended.

Private Dobbie was discharged from the hospital, at sea on 26th of November 1918. He disembarked from S.S. Zealandic on the 5th of December 1918 at London. He was then assigned to the 22nd Battalion on 7th of December 1918. Private Dobbie’s battalion was posted to Southampton on the 28th of January 1919. Much to his dismay he became ill with Bronchitis on 29th of January 1919. Whilst sick with Bronchitis, Robert was admitted to a staging camp in Europe until he was T.O.S. (Taken on Strength) to rejoin with his battalion in France 15th of February 1919.

Due to the war ending Private Dobbie and his battalion did not see active service. They were, however, present for the aftermath of the November Armistice Peace Treaty which was signed on 28th of June 1919. Once the Armistice Treaty was formally signed and administered, Robert and his battalion disembarked at Southampton on 30th of May 1919 to begin their journey home to Australia. Robert finally arrived in Australia on the 26th of February 1920, now 22 years of age.

For service to his country he received a British War Medal, 1914 to 1915 Star Medal and the Victory Medal. Due to Private Dobbie not engaging in active service during the war there was some dispute about him receiving the Victory Medal. Despite him being informed that he was ineligible for the medal, he was later issued with it.

In 1928, Robert married Doris Isabela Richards. When his father died in 1949, Robert was listed as a farmer in Jarklin.
He later moved to 4 Eaglehawk Road, Bendigo. He died in August 1972 at age 74 and is buried in the Eaglehawk Cemetery.