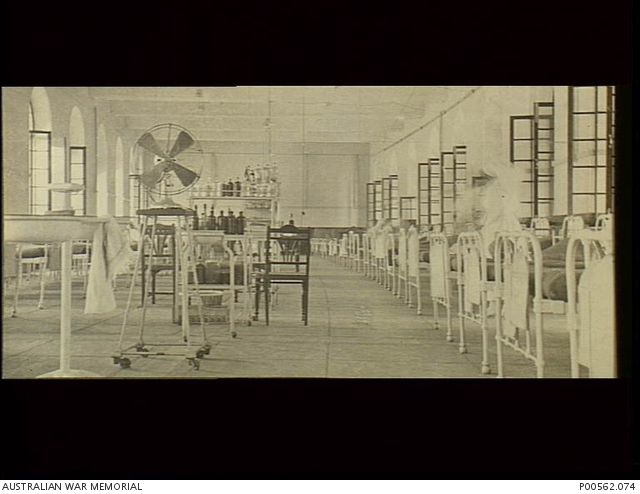 The interior of the Freeman Thomas war hospital in Bombay, India. Photo from Australian War Memorial.

Daughter to John and Elizabeth (nee Wearne), Florence was born in Raywood in 1888. She later worked at the Bendigo Hospital. After enlisting in 1917, she served in Bombay, India for two years.

The interior of the Freeman Thomas war hospital in Bombay, India. Photo from Australian War Memorial.

After her discharge in 1920, Florence worked at the Pioneer Health Centre at Peckham, London in 1926. This health centre was part of a leading study into preventative health care. Florence was particularly interested in improving the health of babies and children.

Florence travelled from the north to the south of Africa by herself in 1927. She gave lectures in Australia on the history of the British Empire and her observations from her travels.

Florence later worked as the sister in charge at the RSL Children’s Health Bureau at ANZAC house for 12 years upon her return. Following her passion for helping others, Florence worked in infectious disease hospitals.

She eventually founded the Victorian Branch of the Save the Children Fund, which is now firmly established throughout Australia. Florence worked tirelessly to raise awareness, funds and relief for children and families. She was a passionate advocate for preventative health and wrote many letters to newspapers sharing her views. At the time of her death, Florence was the national president of the Save the Children Fund. She was 74 years of age. The organisation now has a scholarship in her memory for research in the field of maternal and child health.

Florence never married. Her two sisters- Mary Ann and Marion Patience Grylls- had married local men John Thomas and Ernie Old in a double wedding ceremony at the Dingee Methodist Church in 1905. Her brother John was a Regimental Sergeant Major in the Anzac Cyclist Battalion and returned to Australia in 1919.