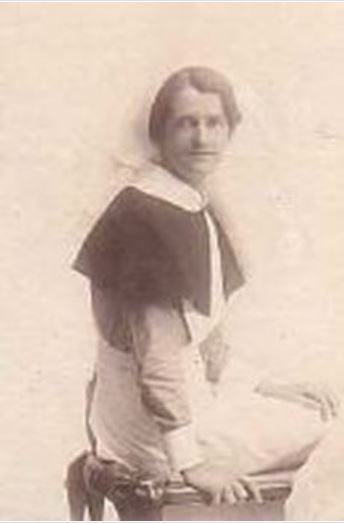 When the war was declared in August 1914, the Commonwealth called for nursing assistance in the war. By October 1914, over 300 nurses had volunteered for the service.

Frances Alice Robinson was born to William Robinson and Catherine (nee Ross) on the 1st of August 1882 at Pompapiel, Victoria. Alice started school at the age of three at the Calivil State School, to maintain numbers and prevent the school from closing. It is said that her older sister Mary had to piggyback her the 3 miles each way.

Alice, at thirty-three years and two months old, was described as five feet four inches tall with a dark complexion, dark brown hair and weighing eight stone, two pounds. Alice was of the Church of England Religion with one distinguishing mark; a scar on her left hand.

After school, Alice decided to follow in her sister’s footsteps and trained to become a nurse at Bendigo’s Lucan Street Hospital (now the Bendigo Base Hospital.) After her training was complete, Alice moved to the Jerilderie Hospital in southern New South Wales. Here she was a matron for seven years.

She was officially appointed into the AIF on the 3rd of November 1915, after which she was sent to Ghezireh, Egypt on the 8th of December to commence duties with the No. 2 Australia General Hospital. Her service saw her transferred to the Chonbiah Military Infectious Hospital in Cairo on the 2nd of February 1916 and in the July she was redeployed to the No. 3 Australian General Hospital at nearby Abbassia.

Alice was repatriated in January 1918 due to cholecystitis. She returned on the HMAT Euripides on the 21st of March, 1918. For her war service, Alice was awarded The 1914/1915 Star, The British War Medal and The Victory Medal.

After the war, Alice worked as a knitting manufacturer and later married Harvey Alexander White on the 18th of June 1930 to at the Holy Spirit Church in Belgrave. Harvey died in 1937, and Alice moved to Queensland in subsequent years, owning a confectionary store in Holland Park.

Alice shifted back to Victoria in 1947, living with her sister-in-law for some time. Alice was admitted to The Overton Aged Care Facility in Kew after a fall and contracting shingles. It was at Overton that she passed away on the 17th of March, 1973 aged ninety years and seven months.

Frances Alice Robinson travelled the world during World War One, serving her country until illness prevented her from doing so anymore. She remained sharp-minded right until her passing.