Kate Laity was 27 years old when she signed up for war service in 1915. She had been nursing in Australia for 6 years already, being prompted to sister 12 months prior to enlistment and held the role of acting matron.

After spending time nursing in England from October 1915 to January 1918, she served in France. She remained there until October 1918 when she was promoted to Sister.

Kate understood the need to distract injured men from their suffering. She noted,

“We principally had to try and amuse them, to make them forget”

(cited in Kirsty Harris, More than Bombs and Bandages).

It was often very difficult for Kate and her fellow nurses to achieve this goal of amusement due to the sheer number of patients they had to attend to. When Kate was working in a clearing hospital at Sutton Veny, she said there were 250 beds, yet only three attending sisters. 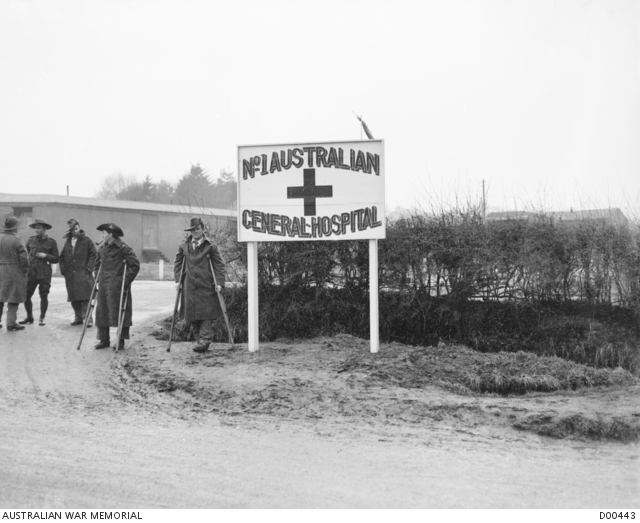 The entrance and signboard of the No. 1 Australian General Hospital where Kate nursed for some time. Image sourced from the Australian War Memorial.

Sister Laity returned to Australia in 1919 aboard the ‘Norman’, still on active duty. Kate moved to Mount Martha and never married. She lived to the age of 95 years.