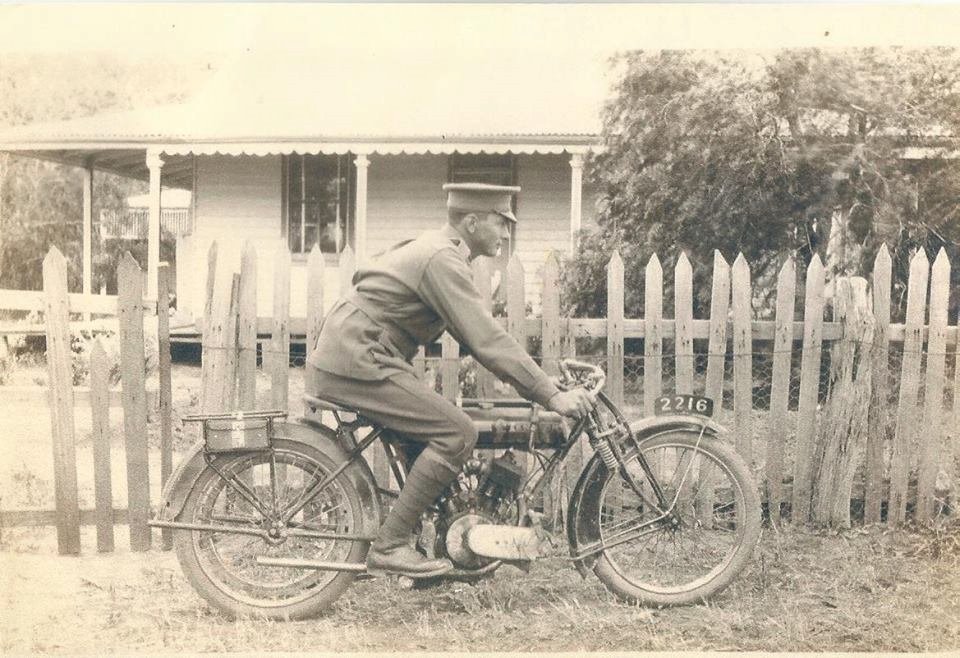 Private Arthur Humbert fought and tragically died in action only weeks before his brother George was set to leave for the battlefront himself.

Arthur enlisted on the 7th of July, 1915 in Bendigo. Born in Bendigo, his family had moved to the town of Prairie and he worked there as a farm labourer. At 25 years of age, he was a well-regarded young man who stood at 178cm (5 feet, 10 inches) with a dark complexion, grey eyes and dark brown hair.

He was part of the 9th reinforcements to the 21st Battalion of the AIF, embarking from Melbourne aboard the brightly painted HMAT Warilda on the 8th of February, 1916. He travelled to Alexandria, Egypt and Marseilles, France on his way to the battlefront. During this time, Arthur wrote a letter to a Mr. R. Hawkins which was published in the Bendigo Independent newspaper. In this letter, he shares that he was enjoying his trip so far, reflecting on his situation:

“I suppose we have Kaiser Bill to thank for it all, but no doubt, we will have to pay for it very soon now.”

As a farmer, he couldn’t help but describe the farming practices in Egypt as “real irrigation country” and detailing the size of the crops. He later mentions the orchards in France and compares tending sheep in Australia and France. 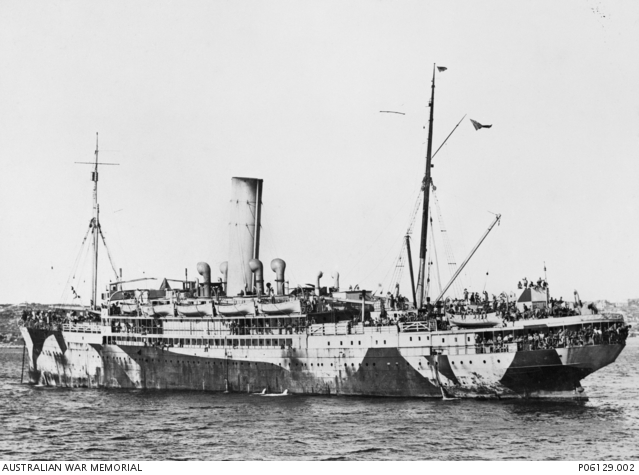 HMAT Warilda in 1917. Though it had previously been brightly painted, it had to be camouflaged in 1917 after the German’s threatened that all vessels moving through the English Channel would be attacked. The Warilda was mostly used as a hospital ship.

Arthur was killed in action in Pozieres, France on the 27th of July, 1916. It would take until September for his family to learn his fate. An article from the Bendigonian newspaper described Arthur as a “fine stamp of young Australian manhood” and stated that he was “very popular throughout the district”. Another article noted that a “wide circle of friends” would regretfully mourn his passing. 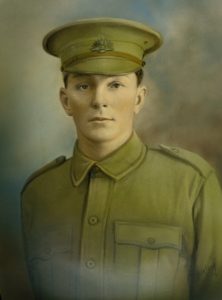 George, Arthur’s older brother had enlisted in April 1916. He was at the Bendigo camp when the family learned of Arthur’s passing and the Inglewood Advertiser reported that he was to “sail within a few days”. Indeed, George embarked from Melbourne scarcely two weeks after finding out his brother was killed in the same war he was about to enter.

The Red Cross Wounded and Missing Enquiry Bureau file indicates that there were several witnesses to Arthur’s death. Reports from Corporal Reginald Bond, Private Charles Wright and Private J Hudson confirmed that Arthur had been hit in the head by shrapnel at a place called Shrapnel Gully between Pozieres and Contalmaison. He had been carrying bombs with the other men when he was struck and died within minutes of arriving at a dressing station. 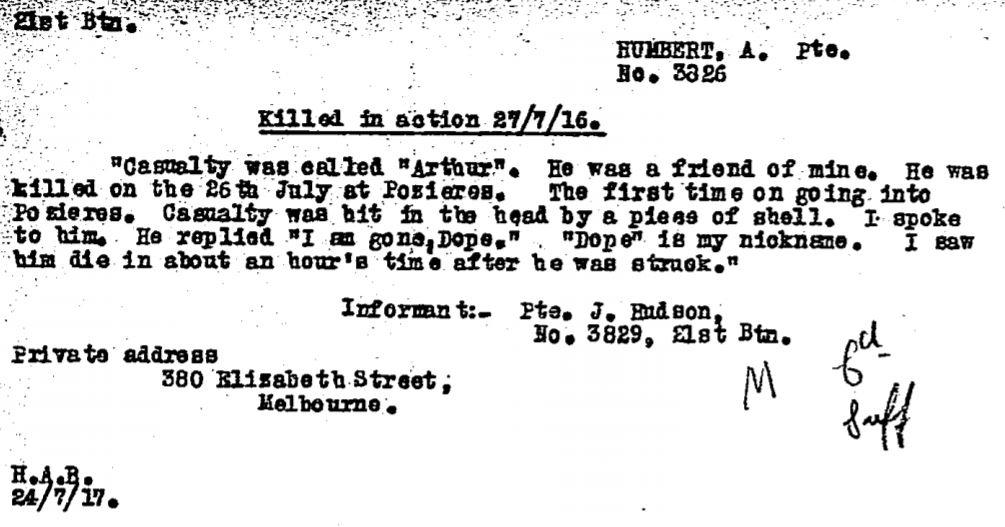 A witness report for Arthur’s death. Arthur knew his time was up and told his friend, “I am gone, Dope”

There were complications finding the site of Arthur’s grave at Pozieres. A memorial plaque was organised in 1922, but a letter from a Captain of Base Records states that although the entire battlefield had been “searched six times, and some places twenty times since armistice”, it was possible that bodies would “continue to be found for years as the work of re-construction progresses”.

Arthur is listed on the honour roll at Serpentine. The supreme sacrifice from the Humbert family was, and continues to be, remembered. Lance Corporal J. W. Joyce wrote a letter to Arthur’s parents (George and Margaret- nee Woods), explaining how their son was killed. He mused that

“many a good son fell in that awful battle, and many a heart will ache; but we all did our best.”