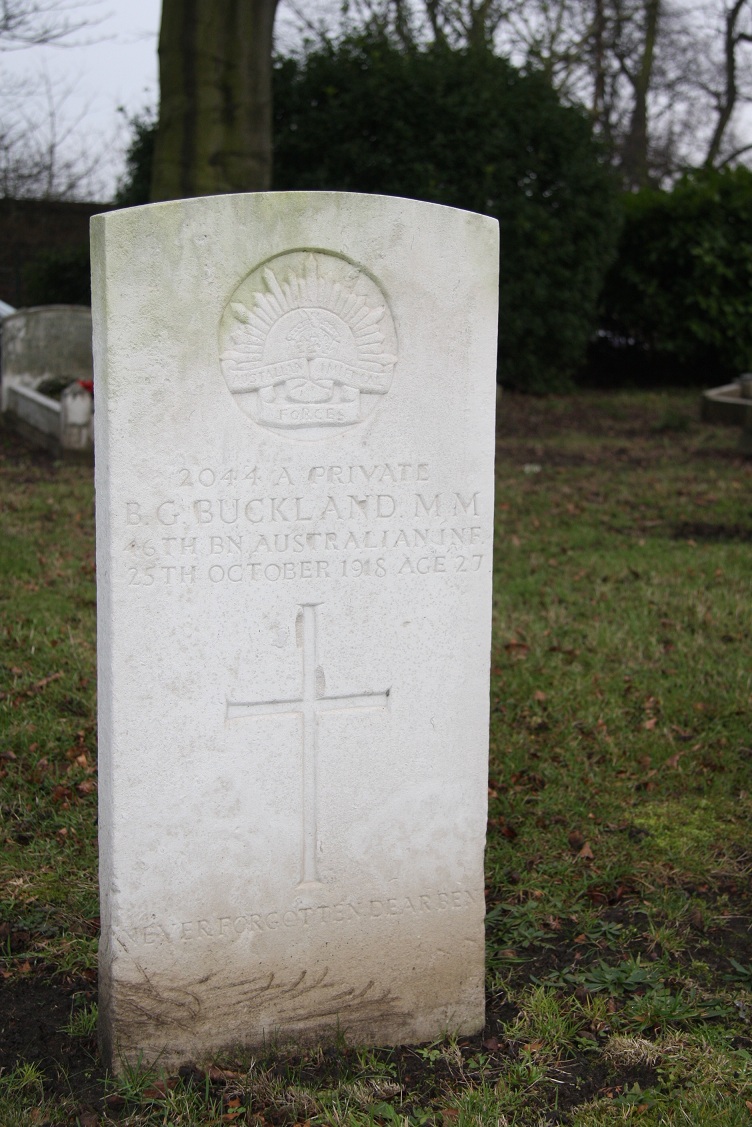 Benjamin's headstone at the Isleworth Cemetery

Ben was a brave runner in World War One. He carried messages across the field to flank companies, dodging bullets as he did his work. He carried on until he was utterly exhausted.

Benjamin George Buckland enlisted on the 1st of April, 1916. His brothers
David and Frank had already enlisted in 1915. At 25 years of age, had blue eyes, auburn hair and was 5 foot, 5 inches tall.

After embarking overseas to France on the 22nd of September, he was soon wounded and admitted to hospitals in Rouen, Havre and later England. He had received a gunshot wound to his face and had a shrapnel wound to his left eye. This was as a result of him running through heavy enemy barrage fire. He was in machine gun swept areas, taking messages from other soldiers to flank companies.

Ben got better and resumed his duties as a runner for the 46th Battalion. He rejoined his unit on the 5th of May, 1917. While on leave in England, Ben got pneumonia in both lungs. He was admitted to 2nd Auxiliary hospital in Southall, England on the 13th October, 1918.

4th Southern Hospital (Salisbury Road School) in 1914. Note the red cross on the roof and the flag.

Ben suffered from pneumonia three times altogether. He got through it the first time but the 3rd time he didn’t quite make it. Sadly, he passed away on the 25th of October, 1918 at age 27.

Ben is remembered and honoured on the Dingee and District Honor Roll at  Dingee Hall and also at the Mitiamo Cenotaph like his two brothers. David, Benjamin and Frank were all farmers and they all got pneumonia at war. All three brothers played for Mitiamo or Calivil. Although Ben passed away from pneumonia, his two brothers survived. Frank came back to Australia in February 1919. David survived and became a member of the 15th Australian Light Trench Mortar Battery on the 6th of September 1919.

Ben’s body was not bought back to Australia with his brothers. He was buried in Isleworth Cemetery, England on the 29th of October. A report was sent to his family stating that Reverend Blackwood consecrated the grave and that some friends and family were present at the burial, including his two brothers.

Ben was recommended for the military medal during operations for bravery and devotion to duty as a runner. The King awarded Ben the Military Medal for bravery in the field. This was published in the London Gazette on the 17th of June, 1919 and the Commonwealth of Australia Gazette issue 115 from the 10th of October, 1919.

“During the operations West of BELLENGLISE on 18/19 September 1918. For bravery and devotion to duty as a runner. He carried messages from front line during the attack through heavy enemy barrage fire. He also crossed machine gun swept area to take information to flank companies. He continued to carry on until utterly exhausted. His grit and determination were very noticeable.”

Ben’s headstone says, “Never Forgotten, Dear Ben.” His bravery and sacrifice for our nation will truly never be forgotten.

Benjamin’s headstone at the Isleworth Cemetery