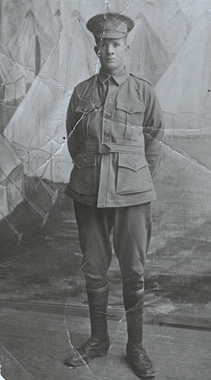 The first Australian in WWI to die on British soil.

Hugh grew up on his parent’s property at Terrick South. Hugh enlisted on the 12th of September 1914 and joined the 14th Battalion of the AIF.

After several weeks of training, he boarded the HMAT Ulysses. After a short stay in Egypt, he proceeded to the Dardanelles where he was wounded early in the attack- evidently by a machine gun wound to the hip. He was taken to Birmingham hospital, where he died of sepsis on May 19, 1915.

Hugh was the first Australian soldier in World War One to die on British soil.