From a pioneering family

David was typical of the characters lost from East Loddon’s finest sons, raised amongst the early Kentish pioneering family of Pompapiel. David was one of ten children born to Henry Horwood Kentish and Susannah (nee Twelftree). He attended the Pompapiel State School.  David later followed his father into farming and left the district with his brother Frank to farm at Finley, New South Wales.

David answered the call to King and Country in April 1916 at age 28 and a half years. A ‘send-off’ was held for him at the Calivil Hall and five days later David embarked to France. He spent a year amongst heavy action in Etaples, Northern France, situated near the coast.

During the battle on the Western Front in October 1917, he received a gunshot wound to the leg. He received six months of treatment and rehabilitation in ‘Reading War Hospital’ in London.

He returned to the battlefield on 16th June 1918. Less than one month later he was killed at Stratzele in France on the 12th of July, six days after his 31st birthday. 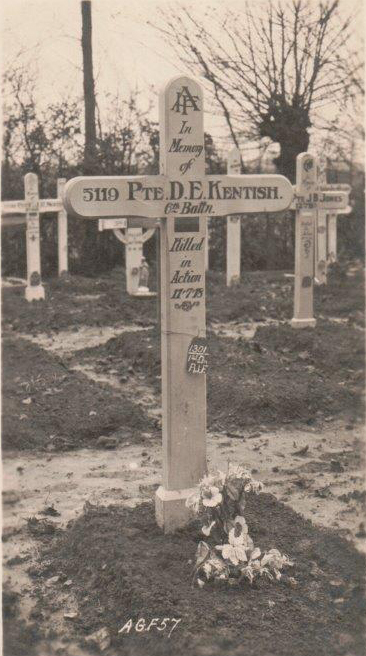 The Inglewood Advertiser announced the sad news of David’s passing:

“He was one of the finest specimens of young Australian manhood, and a great favourite”