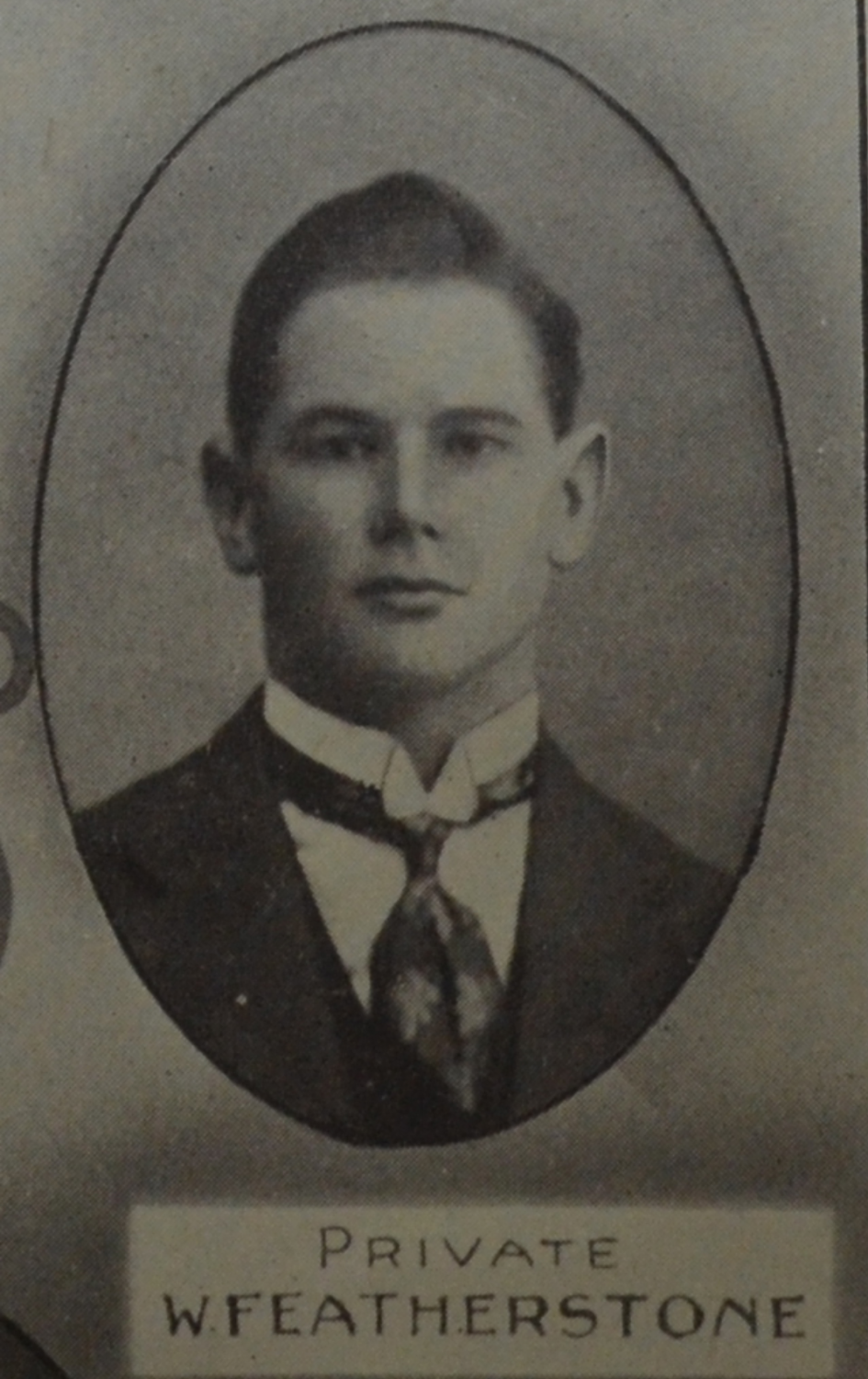 William Eric Featherstone was the son of William and Margaret Ann (nee Taylor). He had one sister named Anita. His father ran the Railway Hotel in Dingee.

As a teenager, William showed heroism even before wartime. In the St Patrick’s College Annual of 1911, an account was given of how William saved two of his school friends from drowning in the Avoca River. According to the St Patrick’s website entry on their old boy, William, The Royal Humane Society of Australasia acknowledged his bravery and included his name on their roll of honour noting that he was one who ‘has earned the commendation of this Society’.

William junior was 18 and working as a horse trainer when he enlisted on the 24th of July, 1915. He had spent three years in the senior cadets prior to his enlistment. He was familiar with how to use a rifle, though he had presumably not pointed one at another person before. The Bendigonian newspaper noted that William (or his father of the same name) had bagged a lot of hares in a hare drive on the 22nd of July 1914.

The community of Dingee came out to support William as they bid him farewell. William, along with Corporal Edmund Hunt and Robert Rodgers, were presented with wristlet watches by East Loddon Shire Councillor E. A. Carey. After the presentation, the song ‘Auld Lang Syne’ was played before dancing commenced.

Departing from Melbourne on the 27th of October 1915 on a boat called HMAT A38 Ulysses, William might have been nervous and a little bit excited about the adventures that lay ahead of him as a young Private.

Despite some records showing a connection to the 23rd and 58th Battalions of the AIF, William was soon transferred to the 57th Battalion (C company) where he spent the majority of his service.

William was promoted to Lance Corporal on the 21st of November 1916. He was unwell a lot in 1916-1917 and was hospitalised at least seven times. His Battalion saw action at Bullecourt, Polygon Wood and Ypres although we do not have any specific information about what William was doing then.

Recieving another promotion on the 5th of October 1917, Corporal William Eric Featherstone led his men during the 3th Battle of Ypres and the German Spring Offensive. After spending some time at the Anzac Corps School, he was wounded on the 5th of April 1918.

Back at home, William missed being present for his sister Anita’s wedding in April 1917. As a result, it was a “pretty but quiet wedding”.

Throughout the war, William’s family were active members of the Red Cross Society in Dingee. Of note, his father donated cigars for 16 Christmas hampers to be sent to local soldiers at the front in 1918.

William was on medical leave in England as of the 3rd of August 1918 and later attended the Lyndhurst Bombing School. He qualified as 1st class on the 14th of September 1918. William did not rejoin his Battalion in the field but remained and served in England until he returned to Australia on the 25th of January 1919.

Life after the war

Upon his return to Australia, William married Charlotte Ellen and had two children: Bill and Marie. Bill would go on to serve in the Second World War.

Electoral rolls show that William worked as a farmer at Korong Vale in 1925, a fireman at Ultima in 1927 and a rail employee/train driver from 1931 in Bendigo through to 1943 in Deniliquin at least.

He died at 51 years of age on the 25th of January 1949 from an illness. He is buried in the Deniliquin Cemetery, New South Wales.