The Bleak House Hotel where Leo and his mother Agnes lived at the time of his enlistment. This Hotel is now called the Beach Hotel.

Driver Leo Michael Slattery enlisted in the Great War on the 20th of August, 1914, only a month after war had been officially declared. He was among the first recruits for World War One.

Leo had been born in 1889 at Calivil to John Francis and Agnes Elizabeth Slattery (nee Lennon) and was the youngest child in the family. He had two older brothers and five older sisters. At his enlistment, he was 25 years old, of average height and weight with a ruddy complexion and light black hair. He worked as a warehouseman and lived at the Bleak House Hotel, Beaconsfield Parade in Albert Park as boarders. Leo’s brother Frank (Francis William) later enlisted on the 5th of October, 1914.

The Bleak House Hotel where Leo and his mother Agnes lived at the time of his enlistment. This Hotel is now called the Beach Hotel.

Leo’s unit embarked from Melbourne aboard the A24 Benalla on the 19th of October, 1914. He was part of the 1st Army Service Corps Company, 1st Divisional Train. He trained in Alexandria after suffering from pharyngitis soon after arriving; he was hospitalised on the 19th of February, 1915.

He joined the Mediterranean Expeditionary Force in Gallipoli on the 25th of April, 1915. This day was likely to be one brutally etched into Leo’s mind forever. It was the day of the landings at Gallipoli. His job would have been to assist the mules ashore and help them transport equipment to a secure place. It would have been very dangerous, negotiating unfamiliar terrain with spooked animals while being shot at from the Turks on the cliffs. In the diary of Major A. A. Holdsworth of the Number 1 company of the 1st Division Train, he recounts how the ‘mules worked admirably’ to carry items like wooden crates ashore. Four mules from the Number 1 Company died that day, by his count.

Leo fell ill on the 30th July 1915 with subacute rhinitis (nasal trouble) from an old injury to the septum. He was conveyed to hospital in Alexandria, then England for treatment for his perforated and deflected septum. This injury led Leo to request discharge from the AIF. By December, he had rejoined his unit but they had already evacuated Gallipoli. Leo had narrowly missed taking part in some of the bloodiest battles at Gallipoli. He may have lost many friends in the August Offensive such as the Battle at the Nek. 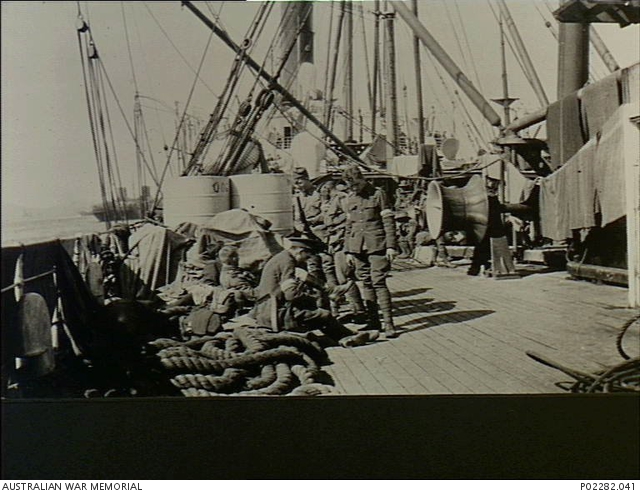 Soldiers from the 1st Division Train in April 1915 preparing for their journey to Gallipoli.

After his return, Leo was detached from his unit and served two-week bouts with the Mobile Veterinary Section in July 1916 and Divisional Artillery Column in early August and mid-October, 1916. He also spent a week with the Artillery Headquarters. In September 1916, Leo’s brother Frank was killed in action at the Suez Canal, Egypt. It is not known when Leo received this devastating news.

After leave in England in June 1917 and Paris in February 1918, Leo was again placed with a different unit, this time with the Field Artillery Brigade from the 7th to the 23rd of April, 1918 and later from the 7th to the 21st of September. In between these stints, he travelled to Italy on leave.
Leo was granted 1914 Special Leave in October 1918 and travelled home to Australia, arriving aboard the HMAT Durham on the 23rd of December, 1918. This would have been an excellent Christmas present for his family. He did not return to the battlefront due to the signing of the Armistice Treaty and was officially discharged from service on the 21st of February, 1919.

While he was abroad, Leo had lost his brother Frank and mother, Agnes. It had been a challenging five years for Leo, but he performed his duty and persisted despite the odds. He was one of the first to enter the war and thankfully returned home safe.